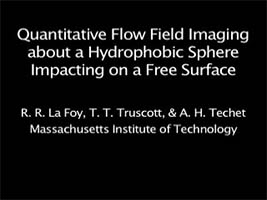 This fluid dynamics video shows the impact of a hydrophobic sphere impacting a water surface. The sphere has a mass ratio of m* = 1.15, a wetting angle of 110 degrees, a diameter of 9.5 mm, and impacts the surface with a Froude number of Fr = 9.2. The first sequence shows an impact of a sphere on the free surface illustrating the formation of the splash crown and air cavity. The cavity grows both in the axial and radial direction until it eventually collapses at a point roughly half of the distance from the free surface to the sphere, which is known as the pinch-off point. The second set of videos shows a sphere impacting the free surface under the same conditions using Particle Image Velocimetry (PIV) to quantify the flow field. A laser sheet illuminates the mid-plane of the sphere, and the fluid is seeded with particles whose motion is captured by a high-speed video camera. Velocity fields are then calculated from the images. The video sequences from left to right depict the radial velocity, the axial velocity, and the vorticity respectively in the flow field. The color bar on the far left indicates the magnitude of the velocity and vorticity. All videos were taken at 2610 fps and the PIV data was processed using a 16 x 16 window with a 50% overlap.