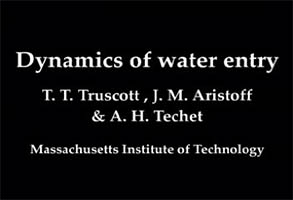 The hydrodynamics associated with water-entry of spheres can be highly variable with respect to the material and kinematic properties of the sphere. This series of five fluid dynamics videos illustrates several subtle but interesting variations. The first series of videos contrasts the nature of impact between a hydrophilic and hydrophobic sphere, and illustrates how surface coating can affect whether or not an air cavity is formed. The second video series illustrates how spin and surface treatments can alter the splash and cavity formation following water entry. The spinning sphere causes a wedge of fluid to be drawn into the cavity due to the no-slip condition and follows a curved trajectory. The non-spinning sphere has two distinct surface treatments on the left and right hemispheres: the left hemisphere is hydrophobic and the right hemisphere is hydrophilic . Interestingly, the cavity formation for the half-and-half sphere has many similarities to that of the spinning sphere especially when viewed from above. The third video series compares two millimetric nylon spheres impacting at slightly different impact speeds (Uo = 40 and 45 cm/s); the faster sphere fully penetrates the free surface, forming a cavity, whereas the slower sphere does not. The fourth series shows the instability of an elongated water-entry cavity formed by a millimetric steel sphere with a hydrophobic coating impacting at Uo = 600 cm/s. The elongated cavity forms multiple pinch-off points along its decent. Finally, a millimetric steel sphere with a hydrophobic coating breaks the free surface with an impact speed of Uo = 350 cm/s. The cavity pinches-off below the surface, generating a Worthington jet that pinches into droplets owing to the Rayleigh-Plateau instability.