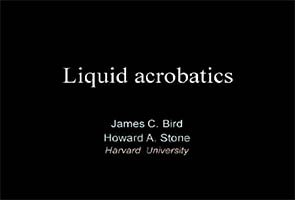 We experiment with injecting a continuous stream of gas into a shallow liquid, similar to how one might blow into a straw placed at the bottom of a near-empty drink. By varying the angle of the straw (here a metal needle), we observe a variety of dynamics, which we film using a high-speed camera. Most noteworthy is an intermediate regime in which cyclical jets erupt from the air-liquid interface and breakup into air-born droplets. These droplets trace out a parabolic trajectory and bounce on the air-liquid interface before eventually coalescing. The shape of each jet, as well as the time between jets, is remarkably similar and leads to droplets with nearly identical trajectories.