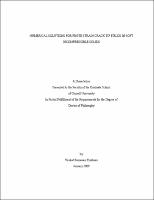 This dissertation concerns itself with problems involving cracks under finite deformation in incompressible hyperelastic materials with special application to soft materials. The main focus is on using numerical methods, in particular the finite element method (FEM), to find the solution of crack tip fields under applied far field loads, in materials undergoing axisymmetric, plane stress and plane strain deformations. In the first chapter a large strain finite element analysis is used to study the deformation of an incompressible Neo-hookean half space in contact with a flat rigid cylindrical punch. Adhesion is assumed between the elastic solid and punch and the deformation is studied as the punch is retracted. Two interface conditions, frictionless and no slip, are considered. Numerical results are compared with prediction of small strain linear elastic (SSLE) theory. The results show that many aspects of the deformation are not captured by the SSLE theory. For example, the interfacial normal stress at the punch edge is much higher for the case with frictionless boundary condition. The deformation profiles are also very different. The results give important insights on how soft adhesives deform when they detach from a hard surface. The second chapter makes use of a finite element model to study the behavior of the large deformation field near the tip of a crack in a soft incompressible plane stress fracture specimen loaded in Mode I. Results are obtained for the case of a Neohookean solid (ideal rubber) and a hyperelastic solid with exponentially hardening behavior. In contrast to the predictions of linear elastic fracture mechanics (LEFM), the near tip stress fields are dominated by the opening stress which shows a 1/R singularity for the Neohookean material and a -1/RlnR singularity for the exponential hardening solid. The results show very similar qualitative behavior in the near tip stress fields despite the very large difference in strain hardening behavior of the two material models. Further, the results show that the near tip opening stress is controlled by the far field energy release rate for large applied loads. The third chaper presents a numerical study of finite strain deformation fields near the tip of an interface crack between a rigid substrate and an incompressible hyperelastic solid using the finite element method (FEM). The FEM simulations make use of a remeshing scheme to overcome mesh distortion. Analyses are carried out by assuming that the crack tip is either ?pinned?, i.e., the elastic material is perfectly bonded (full friction) to the rigid substrate, or frictionless. The focus is on a material which hardens exponentially. For both the frictionless interface and the pinned crack under plane stress deformation, it is found that the true stress field directly ahead of the crack tip is dominated by the normal stress (T22) and the crack face opens up smoothly. This is also true for an interface crack along a frictionless boundary in plane strain deformation. However, for a pinned interface crack under plane strain deformation, the true opening normal stress (T22) is found to be lower than the shear stress (T12) and the transverse normal stress (T11). Also, the crack opening profile for a pinned crack under plane strain deformation is completely different from those seen in plane stress and in plane strain (frictionless boundary condition). The crack face flips over and the tip angle is almost tangent to the interface. The results suggest that interface friction can play a very important role in interfacial fracture of soft materials on hard substrates.