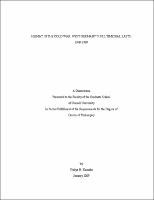 As a result of two world wars, decolonization, and labor migration in the twentieth century the notion of belonging underwent a radical transformation. This dissertation examines how the German concept of Heimat, an arguably untranslatable term that connotes localized belonging, was politically and culturally affected by the Cold War. The dissertation focuses on the role of Sudeten Germans, ethnic Germans expelled from postwar Czechoslovakia, in forging a link between Heimat, border tropes, and the physical landscape of the Iron Curtain between West Germany and Czechoslovakia. It interrogates this linkage, which allowed the expellees to fashion Heimat into an intermedial site of Cold War aesthetics, a linchpin between the postwar era and the Cold War, and an idiom of international law. Chapter One reframes current public and academic discussions of 'Germans as victims'. It moves beyond a German-Jewish dyad to consider how Sudeten Germans engaged Palestine's political, cultural, and religious meanings in order to re-imagine Palestine as a quintessential homeland. Chapter Two reconsiders the role of nostalgia in processes of sensory and, above all, visual contact with Heimat as documented in Sudeten German borderland photography, travel reports, and poetry published during the Cold War. Chapter Three addresses postwar Sudeten German debates on language vis-a-vis literary histories of the 'Sudeten German literature.?' A disjuncture between them posits Sudeten German culture as a challenge to the unproblematic link between a particular language and a certain kind of literary aesthetic as developed in the theory of minor literature of Gilles Deleuze and Felix Guattari. The epilogue probes the analytical salience of 'postwar' and 'Cold War,' two terms used largely interchangeably by many scholars today. It defines their meaning via their relationship to Heimat. Oriented nationally, 'postwar' Heimat contrasts with 'Cold War' Heimat, which resonates in international discussions of self-determination, minority rights, and the right to the homeland. By elaborating the degree to which Sudeten Germans embraced both, this dissertation emphasizes the role of the expellees not only in wartime and postwar contexts but also in the culture and aesthetics of the Cold War.