Roles of Phosphatidylinositol 4,5-bisphosphate in Fc(epsilon)RI-mediated Signaling in Mast Cells. 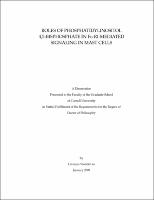 Allergic reactions to substances such as pollen are initiated by immune cells called mast cells. Receptors expressed on the surface of mast cells, termed Fc(epsilon)RI, bind immunoglobulin E to detect these substances and thereby stimulate the calcium-dependent secretion of inflammatory mediators such as histamine (degranulation). In this dissertation we investigate two important events in mast cell signaling; Fc(epsilon)RI trafficking and phosphorylation, and the elevation in intracellular Ca2+ levels, both of which are crucial for stimulated degranulation. In particular, we study the roles of the membrane glycerophospholipid, phosphatidylinositol 4,5-bisphosphate (PI(4,5)P2), and two PI(4,5)P2 synthesizing enzymes, namely the alpha and gamma isoforms of the type I phosphatidylinositol 4-phosphate 5-kinase family (PIP5kinase-Ialpha and -Igamma), in the above processes. In response to Fc(epsilon)RI activation in mast cells, phospholipase Cgamma-mediated hydrolysis of PI(4,5)P2 generates inositol 1,4,5-trisphosphate (IP3), that triggers Ca2+ release from the endoplasmic reticulum (ER) via IP3 receptors. Depletion of ER stores activates influx of Ca2+ by store-operated Ca2+ entry mechanisms. In this study, we show that PIP5kinase-Igamma contributes positively to the IP3-mediated Ca2+ release from the ER, whereas PIP5kinase-Ialpha negatively regulates store-operated Ca2+ influx. Interestingly, both of these effects are mediated at the plasma membrane, suggesting spatially segregated synthesis of PI(4,5)P2 by these PIP5kinase-I isoforms in regulating Ca2+ mobilization. The surface expression and phosphorylation of Fc(epsilon)RI is the first step in mast cell activation. Using chimeric receptors, we provide evidence for previously uncharacterized roles for negatively charged phospholipids in the ER and a polybasic sequence in the gamma subunit of Fc(epsilon)RI in the regulation of trafficking of this receptor to the cell surface. We also show that PI(4,5)P2 regulates the stability of the receptor at the plasma membrane and its phosphorylation by Lyn kinase, potentially by binding to the polybasic sequence.