Statelessness and the Making of a Decolonial Aesthetics in U.S. Literature 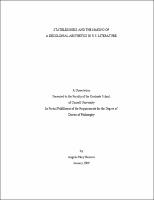 This dissertation explores how U.S. literature of the 1980s and 1990s recalibrates the tropes, figures, and theories of decolonization to examine the meanings of statelessness--of not being considered as a national by any State--in the post-Civil Rights, post-Cold War context. I discuss how writers Kathy Acker, Gayl Jones, Francisco Goldman, Ammiel Alcalay, and Sinan Antoon use literary techniques to reveal statelessness as part of a colonial legacy that still shapes Western social organization. This literary treatment of statelessness is integral to the aims of a decolonial aesthetic practice that reveals and then challenges the political notions that underwrite traditional aesthetic projects, as well as projects to ostensibly counter them (such as the 1960s and 70s project of redefining a Black Aesthetic). Because statelessness is the absent center to definitions of the individual, belonging, and authority, these writers also adapt their treatment of statelessness to reconceptualize the terms of literary authority, including the concept of individual authorship and of a decolonial, authorial practice. Chapter One of this dissertation is a theoretical discussion of statelessness, decoloniality, and aesthetics within the context of this project. Chapter Two explores how decolonial tropes in Goldman's 1997 novel, The Ordinary Seaman, revise literary conventions of immigration and globalization narratives. In Chapter Three, I consider how Acker's anti-conventional practice of conflation in Empire of the Senseless (1988) critically engages with ideologies of neoliberalism and national citizenship. I discuss how Acker conflates C.L.R. James' The Black Jacobins with other texts of anti-colonial revolution to create a zombi(e) figure of political statelessness. The next chapter analyzes the interplay between the Sanctuary movement and a decolonization of the authorial 'self' in Gayl Jones' 1999 novel, Mosquito, and in her essay on a "Third World Aesthetics." The epilogue, "Ghostwriting Iraq," extends Jones' redefinition of authorship as a feature of a decolonial practice. In it, I consider how Alcalay's book-length poem, from the warring factions (2002), and Antoon's novella, I'Jaam: An Iraqi Rhapsody (2007, English translation), elaborate tropes of ghostwriting and linguistic ambiguity as part of their challenge to models of sovereign authority and individual authorship.