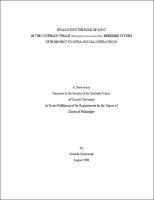 EVALUATING THE ROLE OF SONG IN THE HUMPBACK WHALE (Megaptera novaeangliae) BREEDING SYSTEM WITH RESPECT TO INTRA-SEXUAL INTERACTIONS Danielle M. Cholewiak, Ph.D. Cornell University 2008 Underlying any interaction between two or more individuals is some form of communication, which can be defined as the transmission of information by one individual and the use of that information by another individual in future decision-making. While natural selection shapes signals that are important for survival, sexual selection shapes signals that are important within the context of reproduction. In some cases, sexual selection may lead to the evolution of highly exaggerated traits, such as the extravagant plumage of birds-of-paradise, or the elaborate vocal performance of the common nightingale. Humpback whales (Megaptera novaeangliae) are well-known for their rich acoustic display. Humpback song is the most complex among baleen whales with respect to both spectral and temporal characteristics. Although song features and the behavior of singing males have been studied since the 1970s, our understanding of the role of song within this breeding system remains incomplete. This study investigated the role that song plays in mediating intra-sexual interactions in humpback whales. I combined passive acoustic recording and playback experiments, and developed song metrics derived from avian literature to analyze the behavior of individual singing males with respect to one another. An analysis of diel singing activity found higher numbers of singing males during nighttime hours. Analyses of song patterns revealed that males changed their song presentation while in the presence of other singers by increasing the rate at which they switch between themes, and in some cases, thematically overlapping other singers more than expected (similar to ?song matching? in songbirds). Singing males were found to approach one another more than expected and previously believed. Singers responded acoustically to the presentation of song playback experiments by altering their song presentation similarly to the ways in which they responded in the presence of other singers. Taken together, these data provide evidence that male humpback whales do respond to and interact with one another while singing, and may alter their behavior to target particular individuals. The implications of these results are discussed with respect to hypotheses regarding the function of humpback song.