Barriers to Translocation: Stability, Kinetics, and Acid Denaturation of AvrPto 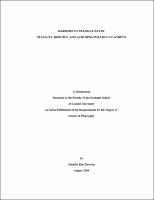 In order to infect their hosts, many gram-negative bacteria translocate agents of infection, called effector proteins, through the Type III Secretion System (TTSS) into the host cytoplasm. This process is thought to require at least partial unfolding of these agents, raising the question of how an effector protein might unfold to enable its translocation, then refold once it reaches the host cytoplasm. AvrPto is a well-studied effector protein of P. syringae pv tomato. The presence of a readily-observed denatured population and the observation of acid denaturation for AvrPto make it ideal for studying the kinetic and thermodynamic characteristics that facilitate translocation. Application of NMR Nzz exchange spectroscopy revealed a global, two-state folding equilibrium with 16% unfolded population, a slow folding rate of 1.8 s-1, and an unfolding rate of 0.33 s-1 at pH 6.1. A non-native conformation with molten-globule character was revealed using a combination of CD, Trp fluorescence, and NMR HSQC spectroscopy. These data reflect an equilibrium in which the stability changes during two separate titration events. The low pH titration is between the non-native form and the unfolded ensemble, while the higher pH titration is between the native and non-native conformations. Remarkably, the high pH titration can be simulated using the His sidechain pKa values extracted from pH titration NMR HMQC spectra. Given the acidic apoplast in which the pathogen resides and the more basic host cytoplasm, these results offer an intriguing mechanism by which the pH-dependence of stability and slow folding kinetics of AvrPto would allow efficient translocation of the unfolded form through the TTSS and refolding into its functional folded form once inside the host. Mutants were rationally designed with the purpose of improving the overall stability or changing the pH-dependence of stability and, hence, alter the secretion efficiency. Using the CyaA translocation assay, it was determined that unstable mutant, H54P AvrPto, which had been previously hypothesized to be translocation-incompetent, could indeed be translocated into the host cell.