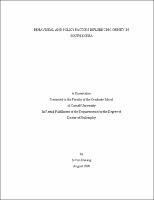 Health officials, scientists, and the public are increasingly concerned about the overweight and obesity epidemics and their negative consequences. While the effects of both individual and policy factors on overweight and obesity are far-reaching, they are poorly understood. Overweight and obesity have become a major public health problem in South Korea, along with its rapid economic growth and globalization process which are related to obesity-related diets and behaviors. The nationwide Korea Health and Nutrition Survey, conducted in 1998 and 2001, and time series data, such as those on imports and prices from around 1970 to the present, were used to address the study objectives. The overall aim of this dissertation was to investigate behavioral and policy factors related to obesity. Effects of price, income, community characteristics, dietary intake, and physical activity on waist-hip ratio were thus investigated in South Koreans. Under the assumption that the effects of trade were mediated through prices and income, the possible linkage between trade liberalization and obesity was also studied. The specific research questions are as follows: how do dietary intake, physical exercise, prices, income, and national health policies affect obesity in South Korea?; which factors among dietary intake, physical exercise, prices, income, and national health policies are relatively more important for obesity programs and policies for Koreans?; and, What are the magnitudes of price effects in terms of waist-hip ratio? Based on an econometric modeling, I found, first, individual, household, and community characteristics were associated with central obesity in South Koreans. Prices had an influence not only on dietary intake but also on physical exercise. Second, effects of income were mediated through dietary intake. Dietary intake, physical exercise, prices, and receiving health examinations were important factors for the prevention of central obesity. Third, price had a direct impact on obesity. When prices decreased by 10%, the prevalence of overweight increased about 2% in the studied population. Community income levels seem to be more important than individual income levels in obesity in Koreans. Although it is difficult to detect the association between trade and obesity, there might be relations between trade and obesity under the assumption that its effects are mediated through prices and income in this study. Whether effects of governmental health policy such as receiving health examinations might be preventive against obesity needs to be studied in a follow-up study. Not only individual behavioral factors but also policy factors are important in the reduction and prevention of obesity. To reduce and prevent obesity, it is important to find an appropriate target population. This study would be helpful for the targeting in Koreans.