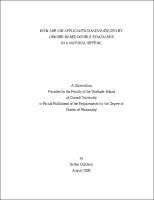 Controlled experiments have found that mixed-sex interaction triggers the use of gender status beliefs encouraging actors to view men as more status worthy than women (Correll & Ridgeway 2003; Foschi 2000). When these mechanisms are at play in actual employment settings, the implication is that employers will be more inclined to hire, promote, and praise male workers even when they produce identical evidence of competence that their female counterparts. Although hiring settings are rarely accessible to researchers, this project identified a unique exception that permitted direct observation and data collection on real evaluations made in the course of live interactions. The context of this study is the Spanish exam system that is used to recruit applicants to fill important and highly desirable government jobs where women are currently under-represented. The first part of this project analyzes how male and female applicants fare at each testing round. I examined quantitative pass/fail exam data gathered from the Internet and information obtained from direct observation of exam sessions. Consistent with gender status theories, I found that female applicants scored higher than male applicants when exams evaluated female-typed skills and lower than male applicants when exams involved assessing neutral abilities ? this effect was substantial in less structured exams (i.e. exam 3) where judges and applicants engage in an actual dialogue. The second section of this work analyzes the features and content of the live conversations that take place in the Q&A portion of exam 3. I audio-taped and transcribed 83 judge-applicant conversations and found that exam judges behave differently toward male and female applicants even when applicants perform at the same level. In particular, judges interrupt women more, ask them more questions, and are less persuaded by the objective quality of their answers. The main contributions of this work are (i) a substantive one, of increasing our knowledge on the sources of gender segregation, (ii) applying theory developed in laboratory settings in a natural context, and (iii) a methodological one, of using the method of conversation analysis to understand the dynamics of judges-applicants interactions.