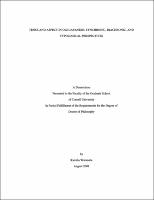 The objective of this thesis is to describe the synchronic system of tense and aspect in Old Japanese. Japanese grammarians studying the tense/aspect morphology of Old Japanese usually identify four suffixes (?(ye)ri, ?tari, ?tu, and ?nu) as kanry? ?perfect? markers and two suffixes (?ki and ?kyeri) as past tense markers. However, this analysis results in a typologically unattested temporal system, characterized by an implausibly rich inventory occupying a small semantic space. The traditional analysis is the product of an approach focusing on identifying the meanings of the suffixes based on contextual information, rather than the syntactic distribution of the suffixes with respect to the lexical semantics of the co-occurring verbs and the overall synchronic system of the language. Furthermore, previous analyses have attempted to produce a uniform analysis covering the entire 700-year period from Old to Early Modern Japanese. In contrast to previous research, I first define the semantic properties of the aspectual markers and their relation to the lexical verb, using data from well-attested languages. Second, I identify the aspectual meaning of the suffixes and the four periphrastic constructions based on the semantic values of the verbs they co-occur with in the Man?y?sh?. Third, I integrate these findings into the overall synchronic tense-aspect system of Old Japanese. I propose that Old Japanese had a perfective-imperfective distinction in both past and non-past tenses. Perfective was marked by ?tu and ?nu, which were subject to a syntactic auxiliary selection constraint, while present imperfective was marked by ?(ye)ri and past imperfective by ?kyeri. Additionally, ?tari and the periphrastics indicated specific aspectual meanings: resultative and progressive. I then compare this synchronic system with the tense-aspect systems of well-attested languages in order to confirm the typological plausibility of the proposed system. Lastly, I examine data from Early Modern Japanese using Genji Monogatari and compare the results with the Old Japanese data. The diachronic change from Old Japanese to Early Modern Japanese provides further support for my synchronic analysis of Old Japanese.