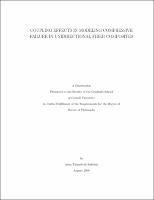 Predicting compressive failure of a unidirectional fibrous composite is a longstanding and challenging problem that we study from the perspective of expanding on a model introduced by Bai and Phoenix(2005). As the compressive load is increased, fiber failures are assumed to occur due to random flaws. These breaks are often shear-mode failures with slanted surfaces that induce shear dislocations and limited interpenetration of fiber ends, especially when they occur in small groups aligned obliquely. The present version of the model treats interactions of dislocated and neighboring intact fibers through a coupled system of fourth and second order differential equations governing not only the transverse deformations but also the axial deformations associated with interpenetration. The formulation also allows for local matrix plastic yielding near and within the dislocation arrays. Using the discrete fourier transform method we find an analytical solution form, which naturally embodies the local length scales of both fiber micro-buckling and longitudinal load relaxation near breaks. Basedon the influence function, superposition approach, a computationally efficient scheme is developed to model the evolution of fiber and matrix stresses. Under increasing compressive strain the simulations show that matrix yielding promotes increases in the bending strains in fibers next to small groups of obliquely aligned and dislocated breaks. The axial locations of maximum bending in each flanking fiber tend to occur in pairs, from which the formation of a kink band becomes plausible. The ultimate goal is to predict the geometric features often seen in kink bands, such as the fragment lengths and characteristic orientation or `slant' angles, which depend on the fiber and matrix mechanical and geometric properties. This dissertation studies the sensitivity of the local fiber strains to variables such as the volume fraction, applied load and clearance ratio. The sensitivity of local fiber strain to the kink band parameters is also discussed.