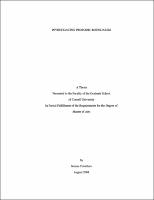 This thesis relates the results of a series of experiments testing speakers' interpretation of ambiguous sentences in which prosodic cues at two relevant locations have been systematically manipulated. The goal was to develop a model to predict sentence?s interpretations based on information about the relative strength of the two boundaries. The model we present builds on Carlson, Clifton and Frazier?s (2001) Informative Boundary Hypothesis, which proposes that attachments are derived based on the relative strength of the two phonetic boundaries, and introduces room for variability based on the effects of Overall Bias and Conditional Bias on the distribution of results. Overall Bias is a bias introduced into the distribution of responses that affects all tokens, shifting the probabilities of each interpretation for every token by the same amount. Conditional Bias is instead defined as a processing-related bias, that reduces the probability of one or the other interpretations only for boundaries larger than a certain amount at a specific location in the sentence. Extra time at this boundary allows the speaker to process the sentence, which makes one or the other readings unlikely. To test the model, we generated a set of sentences with equally spaced boundaries at each of two locations in the sentence that would be consistent with high or low attachment interpretations, thus generating a grid-like structure that can be used as the base for a map of the sentences? interpretations. The tokens were generated using an automated script from a single base file which in turn had been produced by a speech synthesizer, to minimize the amount of variability across tokens. Subjects were then asked to select an interpretation and a confidence rating for each token, which were then combined to result in a weighted response variable. The distribution of the responses, and the point at which interpretations change, can be plotted for each of the items. The predictions about Conditional Bias made on the grounds of sentence processing were borne out for almost all the structures. Some items also showed the effects of Overall Bias, and the remaining part of the cases can be explained by introducing the effects of the experimental task, which can trigger earlier processing points under very specific circumstances. Furthermore, it appears that the amount of boundary which triggers a Conditional Bias effect is consistent across items and structures, suggesting that a systematic threshold is necessary for processing to take place, which should be investigated further in future research.