UNION MOBILIZATION AND VOTER TURNOUT IN LOS ANGELES: THE COUNTY FEDERATION OF LABOR IN POLITICS 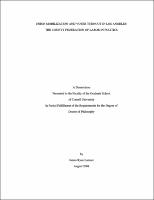 This dissertation empirically tests the role that the Los Angeles County Federation of Labor has played in increasing voter turnout through targeted political mobilization efforts in local elections over a number of years. The literature suggests that the labor organization, often in conjunction with local community groups, is capable of upping turnout for particular candidates in key elections, and as such is a significant force in local politics. However, no empirical work has yet been performed to test this assertion. In measuring labor?s influence on turnout in Los Angeles, the dissertation relies on the political science literature to develop a model for determining vote behavior, and contextualizes the empirical study in terms of labor?s historical role in politics on a national level, and the rise of labor as a political entity in Los Angeles. Quantitative analysis is performed on a data set of over 188,000 individuals in South Los Angeles, some of whom were contacted by labor and community groups during the course of five elections from 2002 to 2004. The first series of models test labor?s influence as a singular entity in three elections, while the second models incorporate all contacting groups and elections. The results suggest that the County Federation, both alone and in conjunction with community groups, has been successful in its efforts to increase turnout, thus validating the accorded praise. The specific findings often support the political science literature on vote-getting efforts, with some key distinctions, most notably when distinguishing between mobilization types.