Toward the Virgo Cluster: On the Study of Neutral Hydrogen in the Local Universe 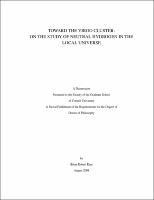 A catalog of neutral hydrogen detections toward the Virgo cluster has been assembled. The data set uses observations from the Arecibo Legacy Fast ALFA (ALFALFA) survey, a large extragalactic survey project using the new multi-beam receiver at the Arecibo Observatory. The survey is an ongoing effort and will eventually cover 7000 square degrees of high galactic latitude sky. The technical background, observing mode, and data reduction procedures will be described. The catalog of HI detections and their associated distributions and statistics will be discussed. A number of unique HI detections from the catalog appear to have interesting properties. Some appear associated with, but offset from, low surface brightness optical counterparts; others, at larger spatial offsets, may be tidally related to optical counterparts. Yet another class includes detections which are not identifiable with any optical emission available in online imaging databases. The preliminary ALFALFA results on these objects in the Virgo region, as well as followup aperture synthesis observations obtained with the Very Large Array, will be described. These gas-rich, optically dim objects are not detected in large numbers and are likely not primordial in nature. We explore scenarios pertaining to their origin from ram pressure stripping of large disk galaxies in a cluster environment. We also briefly discuss an HI mass function for the Virgo HI detections, as well as preliminary simulations of a disk galaxy moving at high speed through a cluster environment. The summary of results will include future endeavors with high-velocity clouds and mapping of galactic neutral hydrogen.