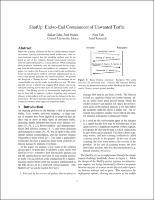 While the majority of Denial-of-Service (DoS) defense proposals assume a purely infrastructure-based architecture, some recent proposals suggest that the attacking endhost may be enlisted as part of the solution, through tamper-proof software, network-imposed incentives, or user altruism. While intriguing, these proposals ultimately raise the deployment bar by requiring both the infrastructure and endhosts to cooperate. In this paper, we explore the design of a pure end-to-end architecture based on tamper-proof endhost software implemented for instance with trusted platforms and virtual machines. We present the design of a ?Shutup Service?, whereby the recipient of unwanted traffic can ask the sender to slowdown or stop. We show that this service is effective in stopping DoS attacks, and in significantly slowing down other types of unwanted traffic such as worms. The Shutup service is incrementally deployable with buy-in from OS or antivirus vendors, requiring only minimal changes to the endhost software stack and no changes to the protocol stack. We show through experimentation that the service is effective and has little impact on legitimate traffic.