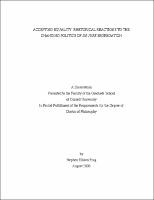 After the passage of the Voting Rights Act of 1965, advocacy of de jure segregation quickly ceased to be an acceptable position within American political discourse. The speed of the political shift left figures who had openly supported de jure segregation with a political problem: how would they explain their former support for a position which had rapidly become not only discarded, but actively disreputable to have held? This study explores the responses to this dilemma through a series of case studies, highlighting different characteristic approaches that various figures took. George Wallace is examined as an example of a politician who tried -- although less effusively than is commonly believed -- to apologize for his former position. Strom Thurmond is examined as an example of a politician who, to the greatest extent possible, took refuge in silence about his former political stances. Robert Bork, whose opposition to the 1964 Civil Rights Act became infamous during the hearings about his nomination to the Supreme Court, is considered as someone who wrote off his former position as a technical (and therefore reasonable) mistake. The case of Herman Talmadge is used as an example of a politician who took refuge in a thin veneer of technical denials. Political commentator William F. Buckley's inconsistent and evasive answers present yet another strategy. And one politician who refused to accede to the new political consensus, Lester Maddox, is used to explore what happened to those who failed to shift with the times. A final chapter explores the attempts of later self-identified conservatives to grapple with the oft-overlooked roots of the conservative movement's political successes in segregationist ideology and Jim Crow's former supporters.