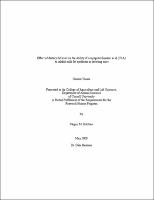 Trans-10, cis-12 conjugated linoleic acid (CLA) is a fatty acid intermediate produced during rumen biohydrogenation of dietary linoleic acid and is a potent inhibitor of milk fat synthesis in the cow. This effect of CLA has also been demonstrated in rodent models. The present study aimed to determine whether dietary fat level affects the response of the mammary gland to CLA in lactating mice. Wild type C57Bl/6J mice (n=31) nursing 6-8 pups were fed semi-purified diets containing either 4% fat (LF) or 24% fat (HF) starting 4-6 d after parturition. High oleic acid sunflower oil was substituted for corn starch to increase the fat content of the HF diet. After a 2 d pretreatment period, dams were orally dosed with water (control) or trans-10, cis-12 CLA (20 mg/d) for 5 d. CLA treatment decreased growth of the nursing litter similarly for both diets; no effect of dietary fat or interaction with CLA was observed. Milk fat percent was increased 16-17% by the HF diet and decreased 12-13% by CLA. Both CLA and the HF diet reduced the proportion of short and medium chain fatty acids in milk fat; these originate from de novo synthesis in the mammary gland. Conversely, the milk fat concentration of fatty acids >16 carbons in length was increased 62-63% by the HF diet, and substantial incorporation of dietary oleic acid into milk fat was observed. In conclusion, CLA caused a reduction in milk fat percent and litter growth that was not overcome by increased dietary fat.