Whistle Production Rates in a Group of Bottlenose Dolphins (Tursiops Truncatus) among Changes in Group Composition in Sardinia, Italy 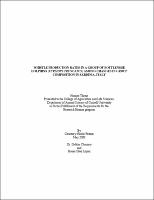 This study focused on the whistle characteristics and production rates of a resident group of bottlenose dolphins (Tursiops truncatus) in Golfo Aranci, Sardinia, Italy. All recordings and observations were conducted at the local fish farm located 200 meters from the shore in Golfo Aranci. Three hundred and eighty minutes of underwater sounds were recorded using a single hydrophone system during the months of June and July 2007. Whistles were separated both according to group size and group composition for statistical analysis. The acoustic characteristics of 176 whistles were classified based on eight parameters and compared with data of previous studies. A significant positive correlation (r = 0.457, p ? 0.001) was observed between whistle rates and group size observed at the time of measurement, supporting our hypothesis that whistle rates increase in groups of larger numbers as compared to groups of smaller numbers. Additionally, whistle production rates of adults in the presence of an immature calf showed a significant difference to those of any other group (p ? 0.05) having a higher whistle production rate (median = 0.5 whistles/minute/individual), while all other groups were not significantly different in the production of whistles (p values > 0.05, median = 0 whistles/minute/individual). Whistles recorded at Golfo Aranci were of longer duration and higher maximum and minimum frequencies than previous studies. The results suggest that bottlenose dolphin whistle rates are affected by both group size and composition, with higher whistle rates in larger groups and in the presence of immature dolphins.