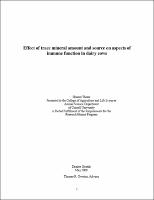 Previous studies have shown a relationship between trace mineral supplementation and improved immune function. In this experiment, 48 multiparous Holstein cows were utilized to determine if trace mineral supplementation of inorganic or chelated organic sources at National Research Council or higher commercial levels would exhibit improved immune function after vaccination with a mastitis vaccine (J-5) and during a LPS challenge. Cows were fed a diet formulated to meet or exceed NRC (2001) requirements for all nutrients except the trace minerals of interest: Zn, Cu, and Mn. Cows were then assigned to four treatments containing organic or inorganic trace mineral sources at commercial or NRC levels. At the end of week two of treatment, cows were administered a J-5 vaccine and blood samples were collected to measure level of IgG production. At the end of week six of treatment cows were subjected to an intramammary LPS challenge. Heart rate and rectal temperature were measured and blood samples were drawn throughout the eight-hour challenge at thirty-minute intervals and again at 24 and 48 hours post challenge. Plasma IgG levels from samples collected on a weekly basis were highest for cows supplemented trace minerals in an organic form regardless of amount. Heart rate and rectal temperatures following LPS challenge did not vary between treatments. Overall, results imply that supplementation of trace minerals in chelated organic form improves immune function and may be an effective tool in enhancing cattle health. However, further study is warranted to determine the optimal level of trace mineral supplementation.