The 'Thin-Body Ideal' in Advertising Featuring Female Models: What is the Impact on Women's Eating Habits of Exposure to Such Advertising? 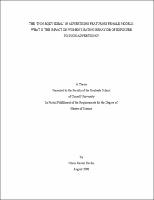 Eating behavior in women following exposure to idealized female advertising images was examined, along with potential predictors of this behavior. Levels of dietary restraint, self-esteem, depression, anxiety and stress, body comparison, body satisfaction, locus of control, and awareness and internalization of the ?thin ideal? were assessed by questionnaires. Participants were randomly allocated to view either advertisements featuring thin female models (experimental condition) or a selection showing products only (control condition), and then invited to choose from a selection of snack foods in a taste test which was claimed to be part of an unrelated study. The type of advertisement (thin models or product-only) had a significant effect on the total weight of food taken by participants, with women who had viewed the advertisements featuring idealized female images eating significantly more than those in the control condition, contrary to hypothesis. Dietary restraint status was found to have a significant interaction effect with advertisement type. No other factors were significant predictors of eating behavior. In addition, women in the experimental condition, in general, didn?t report that they believed exposure to the idealized images had or would affect their behavior, and didn?t report negative emotional effects. These findings reinforce previous research showing that idealized images can have an effect on women?s eating behavior, but suggest that such images may have a complex role in affecting behavior, since exposure resulted in increased rather than decreased food consumption, as would have been expected.