Line and the Landscape: An Exploration into the Process of Making Landscapes 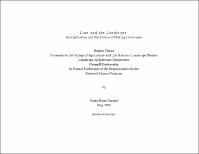