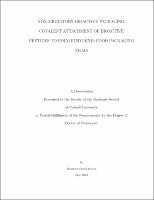 Non-migratory bioactive packaging is a novel form of active packaging. It is packaging which elicits a desirable biological response from food systems without the active component migrating from the packaging into the food. Possible applications for this include in-package enzymatic processing and non-migratory antimicrobial packaging. Poly(ethylene glycol) (PEG) oligomers were covalently attached by one end to surface-oxidized poly(ethylene) (PE) films using carbodiimide coupling; bioactive peptides were covalently linked to the free terminus of the PEG chains using the same reaction. Reactions were confirmed and monitored through contact angle measurements, dye adsorption assays, x-ray photoelectron spectroscopy and atomic force microscopy. Bioactivity of the modified films depended on the peptide attached: antibacterial activity was found for films treated with antimicrobial peptide E14LKK; no activity was found for lactase attached to PE films. Antibacterial activity was demonstrated against E.coli for films to which side-chain-protected E14LKK was attached and then deprotected. Further investigation of the lactase coupling indicated difficulties with amino-carboxy-PEG attachment, despite prior successes with diamino-PEG; amino-carboxy-PEG coupling requires further optimization. Lactase attached directly to PE was inactive, regardless of lactose inclusion in the coupling buffer, however PEGylated lactase is active: the inclusion of a PEG spacer should improve immobilized lactase activity. The effect of the modifications on PE properties important in packaging was assessed through physical, mechanical and optical testing. Properties primarily dependent on the bulk characteristics of the material were generally unaffected by our film modifications. Properties sensitive to film surface characteristics (permeability, optical properties, friction) were affected by the modifications; the changes in these properties will need to be allowed for when designing processes and packages involving the modified films, but should not affect the utility of the film for the standard applications of PE.