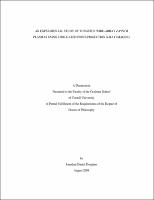 Cylindrical, wire-array Z-pinch experiments have been performed in which ten tungsten wires are imploded using the COBRA pulsed power accelerator. This generator produces a 1.2MA (peak) current pulse with a zero-to-peak rise-time of approximately 100ns. The tungsten (W) wires used in these experiments had initial diameters ranging from 5.1 to 25um. For most experiments the array diameter was 8mm or 12mm and the array height was 8mm. Wire-array Z-pinch plasmas are initiated by the current-driven explosion of the individual wires in these arrays, leading to the formation of coronal plasmas around dense wire-cores. The coronal plasmas carry virtually all of the current once they form. As current-carrying coronal plasma with current density, J, is ablated from the dense cores, the magnetic field, B, of the entire system causes the plasma to be swept toward the axis of the array by the J x B force, although it is believed that the current and magnetic field remain in the plasmas around the wire cores. This continuous ablation and injection of plasma leads to an accumulation of plasma on the pinch axis known as the "precursor" plasma. Eventually, the main implosion phase begins, evidently correlated with the time that gaps form in the wire-core/corona structures. In this phase an amount of mass much greater than that in the precursor implodes onto the array axis causing the primary x-ray pulse. In order to predict the x-ray yield of experiments on future pulsed power machines a good understanding of wire-array Z-pinch physics, including the ablation process, is critical. In order to help achieve this understanding, X-pinches placed in the generator's return current circuit adjacent to the wire-array Z-pinch were used as sources of time-gated (<100ps gating) x-rays for point-projection, soft x-ray (3-5keV) radiography. Areal density measurements of tungsten ablation plasmas are obtained from images captured on x-ray film. This is accomplished by comparison of x-ray film exposure by x-rays that passed through the experimental plasma to exposure levels behind tungsten samples of known thicknesses. Using Abel inversion and reasonable assumptions about the spatial variation of these plasmas, areal density measurements are converted into volume densities. The novel results of this study are the accurate, time dependent ion density measurements in the three primary structures in the ablation process, dense wire-cores, coronal plasmas, and injected plasma streams. The dense core material and coronal plasma density varied slowly with time during the interval 70-165ns and were primarily influenced by initial wire diameter. Dense core material expanded to a final diameter that was proportional to initial wire diameter and then remained static. It was determined that coronal plasma density scales as 1/r^2 outside of the dense core. The areal density of injected plasma increases linearly with time and scales as 1/r as one moves from the dense core toward the array axis. This scaling implies that a significant amount of current flows in the injected plasma stream near the dense core. Measured tungsten densities are in the range ~10^17 to ~10^20 cm^-3.