A Theory of Financial Authority 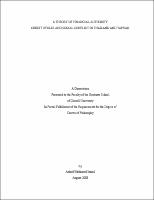 My thesis challenges the central bank independence literature by demonstrating that the delegation of regulatory authority to an independent central bank can lead to asset price inflation and the outbreak of banking crisis. I argue that the central bank independence hypothesis ignores the monetary and fiscal consequences of financial regulation and is therefore conceptually incomplete. I explain the spread of banking crisis among the developing economies in terms of a contractual negotiation between central bank regulators and bank managers over the distribution of the monetary and fiscal outputs of the banking system. My thesis argues that regulatory actions generate monetary and fiscal consequences that privilege some members of society and discriminate against others, and thus delegating regulatory authority to an independent central bank may not eliminate the conflict between the interests of bank managers, shareholders and taxpayers. The substantive chapters of my thesis consist of an empirical investigation of regulatory politics in Thailand and Taiwan. My research is based upon extensive interviews that I conducted at 4 Thai commercial banks, 10 Taiwanese commercial banks. As a result, my research not only offers a new explanation for financial system dynamics, but uses never before published information in order to reconstruct the decision-making environment of bank managers and financial regulators.