Evolutionary Genetics of the Innate Immune System in the Genus Drosophila 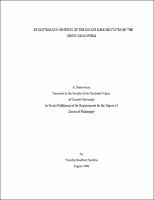 Host-parasite interactions are ubiquitous in nature: all organisms, from bacteria to humans, must defend themselves against parasites and pathogens that seek to use them as a substrate for growth, reproduction, and survival. This coevolutionary dynamic has important implications for genetic architecture of host defense genes, as well as the molecular evolution of pathogenic defense systems. In the first part of my dissertation, I focus on characterizing the underlying genetic architecture of variation for Drosophila immune function. Using a candidate gene association testing approach, I identify genetic markers in several genes (principally encoding recognition proteins) that statistically associate with differences in resistance to bacterial infection. I also characterize the transcriptional response to infection at over 300 infection-regulated genes, and show that differences in the overall level of transcription of genes encoding effector proteins significantly correlates with differences in bacterial load. Understanding the genetic architecture of immune function provides insight into the puzzle of why extensive genetic variation for an important fitness trait persists in natural populations. In the second part of my dissertation, I take advantage of complete genome sequence available for twelve species of the genus Drosophila to study patterns of gene family evolution and positive selection on protein coding genes in the Drosophila immune system. I show that genes encoding proteins involved in recognition of invading microorganisms, specifically those involved in phagocytosis and cellular immunity, are much more likely to have experienced positive selection than either other immune system genes or non-immune genes. Furthermore, I show that rates of gene duplication and loss are extremely high among genes that encode the effector proteins that kill bacteria, suggesting flexibility in acquiring novel downstream components of the pathway during evolution, despite the very strong conservation of orthology among the signaling cascades that initiate the immune response. Taken together, the two parts of my dissertation demonstrate the importance of the structure of gene networks in evolution, and suggest a model where small differences in upstream components can have large phenotypic and evolutionary consequences, whereas even large differences in downstream components can be evolutionarily and phenotypically masked by redundancies among effectors.