Taking the Reins: The Effects of Incoming Leader Status and Behavior on Influence Patterns in Teams 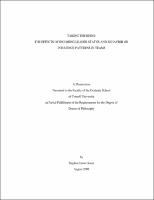 This dissertation examines how a newly assigned team leader's status and leadership behaviors interact to affect the likelihood of influence rivalries with subordinate group members, and how these rivalries impact other group members and the group as a whole. In this research, I make distinctions between a leader-directed team interaction process and an emergent team process, and between leader-directed goalsetting and participative goalsetting. I hypothesize that leaders who use directive behaviors can be viewed as unfair, while leaders who allow a team process to emerge might be viewed as unassertive, and that leader status will moderate these relationships to affect subordinates' assessments of the leader's effectiveness and influence ability. This sets the stage for a potential influence rivalry between the new leader and a subordinate team member, which in turn impacts team performance. I test my theory with a series of three studies using a number of different methodologies. I find that low status leaders are viewed more favorably when they use a directive style while high status leaders are viewed more favorably when they use an emergent style. In addition, I find that teams whose leaders are viewed more favorably perform better on a complex interdependent task. I discuss the implications for both theory and practice.