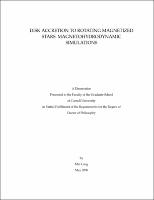 The star-disk interaction between a rotating magnetized star and a surrounding accretion disk is a fundamental process in astrophysics, and is usually difficult to investigate due to the complicated magnetohydrodynamic structures. The aim of this work is for understanding the accretion manifestations of this interaction, especially the mechanism of the transport of the angular momentum, and the influence of the complex magnetic geometries on the accretion behavior. One of the complicated aspects of the disk-magnetosphere interaction is the angular momentum transport between the disk and the star. It was proposed that the ralation between spin-up torque arising from the magnetic connection of the star to the fast rotating inner part of the disk, and the spin-down torque arising from the connection of the star to the slow rotating outer part of the disk determines the spin evolution of the star. It was suggested that for a particular value of the star's rotation rate, the positive spin-up torque balances the negative spin-down torque and the star is ``locked" in the rotational equilibrium state. We improve the model of the transport of the angular moment and present the most probable periods of rotation in the equilibrium state for different astrophysical objects, such as classical T Tauri stars, dwarf novae and millisecond X-ray pulsars. The magnetic geometry of a rotating star can have a strong influence on the matter in an accretion disk, which is disrupted and channelled by the magnetic field to the star along the field lines. Theoretical and observational approaches reveal that the actual magnetic geometries of stars may depart from the pure dipole configuration. We study the accretion in different complex magnetic configurations including pure quadrupole, aligned dipole plus quadrupole, misaligned dipole plus quadrupole and superposition of off-centre dipoles. The results show that they have different features in matter flow, hot spots on the surface of the star and associated light curves, such as accretion ``belt", extended ring-like hot spots and non-sinusoidal variations of light curves for large inclination angle, which could be used as an indicators of a complex field.