SPATIAL AND TEMPORAL HABITAT USE BY BIOLUMINESCENT MARINE OSTRACODS 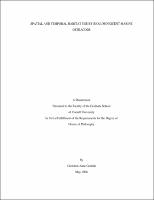 Throughout the Caribbean, there exists a diversity of nocturnal ostracod species that conduct nightly bioluminescent courtship displays over seagrass bed and reef habitats. Identification and naming of these species began as early as 1975 and since then, researchers have focused on the chemistry and behaviors associated with their bioluminescence displays. However, minimal knowledge of their basic ecology exists in the current literature. Here, I develop the natural history of the seagrass bed inhabitant, Vargula annecohenae. First, I describe the three to four month life cycle of this bioluminescent marine ostracod, which consists of an initial 18.4 ? 0.52 days of embryonic development, approximately 20 day duration for each of five juvenile instars, and maximum survival of 180 days for adults. Second, I quantify the activity of each age class in relation to lunar light. The foraging behavior of juveniles does not change based on the intensity of lunar light, however adult foraging and courtship behaviors are significantly reduced by the presence of anything greater than a third of a moon illuminating the sky. Third, I use the life cycle and activity information in modeling dispersal for V. annecohenae across a heterogeneous 12.2 x 3.6 km portion of seagrass bed habitat. Models based on mark and recapture studies indicate males could move as far as 390 m in their lifetime meaning genetic differences across a distance of 12.2 km would be unlikely if the habitat was continuously suitable and homogenous. However, highly significant genetic differences were observed within the 12.2 km by 3.6 km region of study. Analyses of habitat variables (water velocity, water depth, seagrass density) in a geographic information system (GIS) indicate that physical barriers to dispersal influence gene flow within this system. Finally, I asked whether habitat constraints acted upon other species of bioluminescent ostracods by measuring the spatial and temporal differentiation of courtship displays in three coexisting reef species. Despite some overlap, each species displayed in a specific microhabitat, initiated its display and peaked in display density at places and times distinct from those of the other two species.