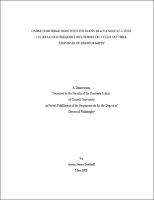 The research in this thesis was focused on cadmium (Cd) uptake and transport in Brassica napus, a plant with phytoremediation potential. Early efforts were targeted to development of a system to monitor Cd depletion by B. napus in hydroponic nutrient media. Termed the Experimental Cadmium Uptake Detection System (ECUDS), it was able to detect rapid Cd depletion in nutrient solution. ECUDS data suggested that biphasic depletion kinetics were occurring in the system, and therefore multiple mechanisms may have been present. One of these mechanisms was suspected to be apoplastic Cd binding, and thus a batch based system was developed to study these binding characteristics of B. napus roots. This system demonstrated that dead B. napus roots bound about 90% of the Cd, and suggested that apoplastic binding was responsible for significant Cd depletion in ECUDS. Temporal Cd binding data were further modeled using a kinetic equation derived from the law of mass action that assumed the binding would eventually reach equilibrium, and that there were a finite number of binding sites. ECUDS was then reconfigured, using a larger volume to reduce the impact of apoplastic binding on system Cd depletion. Concurrently, xylem sap thiol response to Cd stress was investigated by measuring concentrations of cysteine, glutathione, ?-glutamylcysteine, and phytochelatin. These compounds were of interest since root-to-shoot heavy metal transport processes are poorly understood, yet maximizing these processes is vital for successful phytoremediation. Under Cd stress, xylem sap concentrations of cysteine, phytochelatin, and a ?glutathione-like? compound increased. These results suggested the likely involvement of phytochelatins and other thiol compounds in long distance Cd transport. Cd depletion measurements indicated that apoplastic binding had less impact on Cd levels in the reconfigured system. Uptake processes were kinetically differentiable into a rapid and gradual phase in the Cd depletion profile. Plotting depletion rates from the gradual phase versus Cd loading concentration revealed a saturable response that was modeled using Michaelis-Menten kinetics. Thus, depletion measurement systems are capable of resolving uptake kinetics of high affinity (low Km) transport systems and avoid the linear bias found in Cd uptake isotherms derived through desorption-based methods.