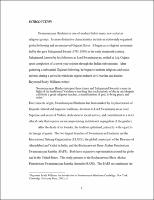 In this thesis, I explore the ways in which women negotiate their own forms of power in the Bochasanwasi Akshar Purushottam Swaminarayan Sanstha (BAPS), a branch of Swaminarayan Hinduism. The study draws from research in primary sources, scholarly sources, and from fieldwork in Atlanta, GA where the Swaminarayan community has grown tremendously in recent decades, and the Shri Swaminarayan Mandir (BAPS) has become the southeast region's leading temple. In Swaminarayan temples, men and women practice strict gender segregation and conduct their own separate and parallel programs in temple life. The saints and the Guru of the BAPS tradition are male only, however, and practice a strict form of celibacy that does not allow them to touch, speak to, or look at women. Therefore, women do not have the same access to religious specialists as do men. Regardless, women are often characterized as more religious than men, inherently faithful, and better devotees. While I find it difficult to substantiate the argument of equality, so too do I find difficulty in the argument of women's marginality. I argue in my thesis that separate gender roles in Swaminarayan religion, even when not equal, do not necessarily marginalize or subjugate women. The question of equality between religious roles of women and men is more complicated than one gender acting as super ordinate and another acting as subordinate. My research looks at the ways women can and do assert power in the Swaminarayan tradition through their own initiatives and from their own spaces.