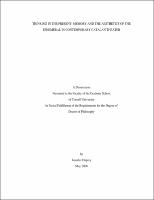 THINKING IN THE PRESENT: MEMORY AND THE AESTHETICS OF THE EPHEMERAL IN CONTEMPORARY CATALAN THEATER Jennifer Duprey, Ph.D. Cornell University 2008 In my doctoral dissertation I argue for the need of a historical and political understanding of the thematic centrality of memory and its relation to the concepts of legacy, war, violence and immigration, in contemporary Catalan theater. My study explores how these tropes are interrelated with an aesthetic of the ephemeral that is materialized both in the texts and in their theatrical representations. In this vein, I argue that contemporary Catalan theater addresses the aforementioned concerns in provocative and innovative ways that are relevant for our present. Works of Catalan playwright Josep Maria Benet i Jornet are examined in the first and second chapters of my dissertation. These two chapters explore the notions of modern ruins and legacy and their import to contemporary Catalan culture in the plays Olors and Testament. In my third chapter, I explore the concepts of war and violence, specifically in the context of the Spanish Civil War, and their connections to the manifestations of power and justice in the play Ant?gona by Jordi Coca. The final chapter examines 20th century theories of immigration, multiculturalism and mestizaje, particularly related to Catalonia, in the plays Temptaci? by Carles Batlle and Forasters written by Sergi Belbel. In its conceptual aspects, this study engages with an array of theoretical approaches, from cultural theory to political philosophy, especially with the writings of Walter Benjamin, Hannah Arendt, Simone Weil, Jacques Derrida, Xavier Rubert de Vent?s, Manuel Cruz and Manuel Delgado. It also engages in a dialogue with current critical work on 20th century Spanish Peninsular literature and culture such as the writings of Joan Ramon Resina, Eduardo Subirats, Teresa Vilar?s and Jo Labanyi. My analysis of this literary corpus also considers seminal works on theater and performance theory such as Josep Palau i Fabre?s, Francesc Foguet i Boreu?s, and Ricard Salvat?s in Spain as well as Marvin Carlson?s, Peter Brook?s, and Richard Foreman?s in the United States and Europe.