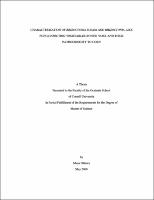 Vegetable growers in New York have recently observed that the corn rotation is no longer effective in suppressing diseases caused by Rhizoctonia solani and Rhizoctonia-like fungi. To investigate this problem, R. solani and Rhizoctonia-like fungi were isolated from naturally infected vegetables in New York. Sixty-eight isolates were genetically characterized and their pathogenicity to corn was determined under greenhouse conditions. Sequence analysis of the rDNA internal transcribed spacer region inferred 26 isolates to belong to R. solani anastomosis group (AG) 2-2 and 19 isolates to belong to AG 4. Remaining isolates belonged to AG 1, AG 2-1, AG 5, AG 11, Ceratobasidium AG (CAG) 2, CAG 6, and Waitea circinata var. zeae. This is a first report of AG 11 and W. circinata var. zeae recovered from naturally infected vegetables in New York. Pathogenicity trials on corn showed that the majority of isolates are pathogenic to corn and isolates belonging to AG 2-2 exhibited high virulence and isolates belonging to CAG 2 exhibited low virulence. These results suggest that certain strains of R. solani and Rhizoctonia-like fungi infecting vegetables in New York have acquired the ability to infect corn. In particular, isolates of AG 2-2 have been previously confirmed to produce the sexual stage under field conditions, suggesting that these isolates may have evolved to infect corn through sexual recombination. In addition, snap bean was inoculated with isolates exhibiting variable virulence on corn and a potential correlation between virulence on corn and snap bean was observed.