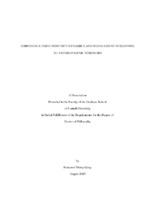 Fish communities in New York’s Adirondack mountain region face numerous threats including the continued impacts of acidification, introduction of non-native species, and loss of connectivity. Effective management relies upon the strength of assessment techniques, which are necessary both to detect impacts and to evaluate the success of any mitigation efforts. To address this need, I began by evaluating the methodology behind boat electrofishing, a widely-used tool for fish community assessment. Results from this study indicate that the predominant metric for “effort”, time fished, has the potential to by biased by gear saturation when catches are high, leading to inaccurate catch indices. Two alternate effort methods, shoreline length and a novel “area fished” metric, were not biased by gear saturation. Next, I validated a new population estimation technique known as close-kin mark-recapture, which allows for genotype-based estimates of absolute abundance and survival. A side-by-side comparison suggests that the method produces contemporary population estimates for brook trout (Salvelinus fontinalis) comparable to those obtained using traditional techniques. Close-kin mark-recapture is more flexible than traditional techniques and can also provide accurate historical estimates of abundance. I built upon this work to provide context for the ecological changes that these techniques can help to detect and assess. First, I investigated changes to the trophic dynamics of Honnedaga Lake following the colonization of two zooplanktivores: the native invertebrate Chaoborus punctipennis and introduced rainbow smelt (Osmerus mordax). Analyses of the zooplankton community composition indicated that both colonization events rapidly changed trophic dynamics. Zooplankton community response to colonization by Chaoborus also suggested that cryptic changes in their abundance may explain regional zooplankton trends, especially in relation to increased lake browning. Finally, I addressed connectivity issues by using PIT-based telemetry and mark-recapture modeling to investigate movement of white sucker (Catostomus commersoni) in the Bisby chain of lakes and the resulting implications for connectivity. Results revealed extensive and previously unrecognized diel movement between lakes, underscoring the need to consider connectivity in systems often regarded as isolated units. Ultimately this work highlights the need to consider complex interactions between stressors when managing aquatic ecosystems and provides tools to accomplish that goal.