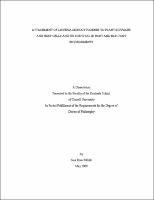 Listeria monocytogenes was originally recognized as a pathogen of rabbits and guinea pigs following an outbreak of disease in animal care facilities in England in 1926. E.G.D. Murray subsequently performed the initial characterization of this gram-positive bacterium. The first widely recognized outbreak of human listeriosis (i.e. the illness arising from L. monocytogenes infection) due to consumption of contaminated food occurred in Canada and was reported by Schlech and colleagues in 1983. After this outbreak, research of L. monocytogenes transmission through the environment and research of its virulence mechanisms intensified. Scientists quickly identified several key L. monocytogenes virulence factors, one of which is encoded by the gene primarily responsible for host cell invasion (i.e. inlA). However, the factors that contribute to its environmental persistence, including possible reservoirs, as well as a complete understanding of its virulence mechanisms remain undefined. Research has continued in order to better define L. monocytogenes means of attachment to surfaces, which is a critical step in facilitating persistence and virulence. In addition, there is evidence that genetically, phenotypically, and epidemiologically distinct subsets of L. monocytogenes strains (i.e. lineages) exist and have different capabilities for surviving in natural and food processing environments and for causing disease. Several genes with structures similar to inlA, designated internalin-like genes, are known to vary in presence among the lineages and these genes have been proposed to contribute to L. monocytogenes attachment abilities. On a larger scale, several genomic regions containing multiple genes have been identified that also vary in presence among the lineages. The variation in these internalin-like genes and large, unique genomic regions may represent the source(s) of the phenotypic and epidemiological differences observed among the lineages. The research presented here indicates that it is unlikely that the differing propensity to cause disease observed among L. monocytogenes strains results from the presence or absence in the L. monocytogenes genome of unique virulence factors, and rather is a consequence of another source, for example sequence divergence.