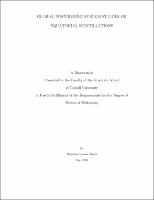 The Global Positioning System (GPS) satellites provide an extensive array of beacon signals for probing the ionosphere. Studies of ionospheric propagation at the GPS L band frequencies (1.2 and 1.6 Hz) are of great interest for proposed communications satellite systems as well as for GPS itself. This dissertation describes the development and use of a specialized GPS receiver which measures signal strength at a high data rate (50 samples per second). The instrument monitors amplitude scintillations and the present application studies scintillations produced by propagation through equatorial ionospheric irregularities, particularly equatorial spread F. Several observations of GPS scintillations from stations near the geomagnetic equator (primarily Ancon, Peru) during equinox seasons are presented. Studies performed include drift measurements by correlation between spaced receivers and multiple instrument studies encompassing GPS scintillations, 50 MHz radar observations (at the Jicamarca Observatory) and 630 nm airglow images (from Arequipa, Peru). Observations of possible diffraction patterns generated by sharply defined differences in ionospheric electron density are also presented. Modeling suggests that the conditions required to obtain such patterns are gradients with widths of ~16 meters and a change in E or F-region total electron content (TEC) of about 1x10^16 electrons per m2, narrower and steeper than previous VHF observations of similar patterns imply. Finally, comparisons between TEC fluctuations, as measured by a dual-frequency GPS receiver, and GPS amplitude scintillations are made for collocated receivers at Ancon. Such comparisons are important because of the availability of global networks of GPS receivers which can be used to study TEC fluctuations at low sample rates (typically 30 seconds per sample). Several researchers currently conduct irregularity studies using the low rate TEC data from these networks, but the relationship between low-frequency TEC fluctuations and L band has not been investigated. This study concludes that, for the same line of sight, TEC fluctuations and scintillations are often related, and that relationship is explored here using a simple, one-dimensional phase screen model.