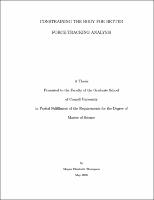 My work has two goals: to develop a method capable of comfortably isolating a single group of muscles to improve in vivo human muscle testing and to investigate how well humans can track target force profiles. I designed, built, and tested a system for isolating leg-extensor muscles (muscles that lift the lower leg) and for measuring knee extension forces during an interactive tracking experiment featuring computer feedback. The chair was designed to isolate the leg-extensor muscle and to eliminate movement by forming rigid connections to the body. When properly constrained in the chair, the maximum movement observed during "fixed" leg angle experiments was a leg rotation of ~1 degree. In the first force-tracking experiments, the test subject tracked a periodic target force function at a fixed leg angle. In the second experiments, the subject attempted to match a constant, ramp, or sine wave force profile as her leg angle was being oscillated from 90 degrees to 120 degrees by a motor. Target wave frequencies for the fixed-angle experiments were 0.10 Hz, 0.25 Hz, 0.50 Hz, 1.00 Hz, and 2.00 Hz; for variable-angle experiments: 0.25 Hz, 0.50 Hz, or 1.00 Hz. Among fixed-angle tests, the lowest RMS error was 4.12%, and the highest was 23.86%. The best variable angle result, obtained while tracking a constant force, was 9.06%. Error was considerably lower for fixed-angle experiments than it was for variable-angle experiments--the lowest measured error in variable-angle tests was similar to the highest error in fixed-angle tests. Results generally improved with increasing target force magnitude and worsened with increasing target and forcing frequency. For fixed-angle tests, conducting additional tests improved accuracy but not precision; the opposite was true for variable-angle tests.