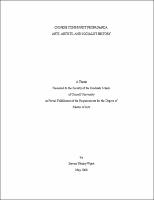 Since May 23rd, 1942 when Mao Zedong outlined his directives regarding arts policy in his closing remarks as the ?Talks at the Yan?an Conference on Literature and Art,? there has existed a singular interconnection between Chinese art and politics. Throughout various political and ideological campaigns, artists and writers were treated as a ?cultural army? to mobilize the people and to engineer the soul. To this end, artists and writers were often constrained to specific topics and styles and subject to both censorship and self-censorship. An examination of the results of these constraints and the reaction on the part of artists as well as viewers of this work provides a window into an important aspect of socialist life: the often tense relationship between the ideological demands of the Party and the private desires of the Chinese people. The intent of this thesis is to describe both the nature of propaganda work and the system of controls under which it was created. Specifically I will describe the constantly shifting political winds, the tightening and relaxation of content and stylistic limitations, and the variegated, often ambiguous, sometimes violent ideological movements, all of which had a profound effect on artistic and literary production. This description includes all major political movements starting with the ?Yan?an Talks? in 1942, the ways in which control systems continued to affect art and literary production after Mao?s death in 1976, and how this system continues to have influence today. This thesis also attempts to make preliminary conclusions about the effectiveness of propaganda materials and their potential unintended effects. The purpose of these observations are to highlight the areas in which the study of Chinese propaganda materials is deficient and thus create a space for my future dissertation work.