Risk perception and communication about agricultural biotechnology in developing countries: The case of Bt eggplant in India 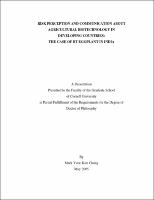 Several researchers - most notably Lennart Sjoberg and his colleagues - have proposed that the moral aspects of risk provide a better explanation and prediction of risk perception than the psychometric or cultural model, neither of which accounts for moral concerns. This study is possibly the first to empirically assess if the moral, psychometric and cultural models can explain risk perception of agricultural biotechnology by end users in a developing country. To answer the research question, a scenario was used to elicit perceptions of transgenic Bt (Bacillus thuringiensis) eggplant among 100 eggplant farmers in Maharashtra and 30 eggplant farmers in Tamil Nadu in India. The data suggest that economic benefits, safety concerns, and accountability are most salient to the risk perception of farmer end-users in India. None of the farmers objected to Bt eggplant on moral grounds. Nonetheless, their responses revealed a small number of alternative conceptualizations of morality. This study concludes by suggesting that the psychometric, cultural, and moral models do not account for the risk perception of farmers in India. It proposes that any theory or model that purports to explain and predict risk perception of agricultural biotechnology in the developing world may need to include economic benefits, safety concerns and accountability as key variables.