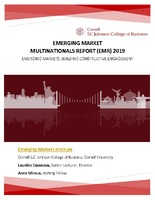 The Emerging Market Multinationals Reports were launched in 2016 at the Emerging Markets Institute in Cornell University. Authored by Lourdes Casanova and Anne Miroux, they study the largest Emerging Market Multinationals. The fourth edition focuses on how these companies fuel the creation of more stable and better-paid jobs, provide resources to conduct research and foster innovation, as well as contribute to the development of small- and medium- sized companies. The rise of Chinese multinationals as measured by their presence on the 2019 Fortune Global 500 rankings has been remarkable and the research explores the specific firms that turbocharge FDI from emerging market countries and compares them to developed markets such as the U.S. and Japan. The report also includes the description of innovation leadership from emerging markets, in particular the case of Huawei, the most emblematic of Chinese firms in innovation, global reach, and impact, as demonstrated by its visibility in the press. The report pays particular attention this year to the rising economic engagement of China in Latin America and Africa, highlighting its increasing role as a key source of finance for both continents through FDI and lending. In Latin America, though lending does not dominate the picture as it does in Africa, in some years China has been the largest source of development finance, even surpassing major development banks. In both cases, Chinese lending and FDI increased significantly over the past decade. Finally, chapters from Wuhan University in China, Universidad de los Andes in Colombia, Tecnológico de Monterrey in Mexico, Universidad del Norte in Colombia and OECD’s EMnet complement the report. View the Full YouTube Discussion of the Report at the link: https://www.youtube.com/watch?v=pzzMjY6z43A

Has alternative text for all images and tables.