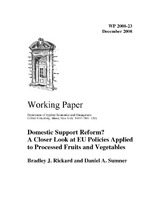 Recent trade negotiations have attracted much attention to the consequences of domestic support applied to agricultural markets. In various markets, researchers have examined the economic effects of regimes and scenarios with less, or different forms of, domestic support including decoupled payments. Here we examine the domestic support regimes for processed fruits and vegetables in the European Union (EU) where major policy changes were applied in 2001 and again in 2008. The changes were billed as policy “reform” but no analysis has yet evaluated quantitatively the nature of what was reformed and what was not. A simulation model is used here to assess the price, production, and welfare effects of policies that have been applied to the EU processing tomato industry. Our results indicate that EU domestic support has increased EU tomato production by 7 to 12%, decreased production in other regions by 3 to 5%, and distorted the processing tomato market most during the period between 2001 and 2007.