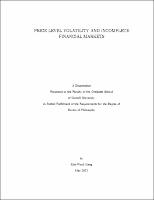 Money is one of the most important elements in the modern economy, but it has a critical disadvantage; it is vulnerable to in‡ ation and in‡ ation uncertainty, mainly due to unstable monetary policies or market psychology (sunspots). The main focus of this dissertation is to investigate the impact of …nancial innovation or …scal policies on welfare and asset prices when the economy is contaminated by in‡ ation volatility. This dissertation consists of four essays. The …rst essay investigates an economy with incomplete …nancial markets as described by Cass (1989), where there is typically a continuum of equilibria driven by sunspots. In this essay, I de…ne price volatility in a natural way and take it as a parameter of a derived economy. I show that for each level of price volatility, there is a unique regular sunspot-economy. Typically, there is no Pareto ranking among the di¤erent sunspot economies. However, I consider a compensation test based on balanced lump-sum tax-transfer plans that are implemented in period 0 and denominated in money or commodities. This test reveals that lower volatility economies are generically Kaldor-Hicks superior to higher volatility economies. The …ndings imply that Kaldor-Hicks e¢ ciency is achieved through sunspot-stabilizing policies. The second essay introduces a sunspots-economy where both money and in‡ ation-indexed bond markets are active. The model of the economy is exactly the same as Cass'(1989) GEI model with the addition of the indexed bonds. MasColell (1992) and Goenka and Prechac (2006) have shown that …nancial markets can be immune to sunspots by introducing real securities such as in‡ ation-indexed bonds. However, the introduction of these real securities results in a complete shutdown of nominal …nancial markets. To resolve this unrealistic outcome, I assume that a transaction cost in intermediating indexed bonds exists. This paper shows that the market for money is always active with the transaction costs of indexed bonds. I also show that these bonds have a greater opportunity to be actively traded as the market has higher in‡ ation volatility. The third essay introduces a two-period monetary general equilibrium model with proportional transaction costs on nominal and in‡ ation-indexed bonds. The main focus of this essay is to investigate the impact of introducing in‡ ation-indexed bonds on nominal interest rates and the welfare of savers and borrowers. I demonstrate that this …nancial innovation on indexed bonds causes equilibrium interest rates of nominal securities to increase when agents have precautionary saving motives. This result implies that ignoring precautionary motives would underestimate savers'welfare gain and overestimates borrowers'welfare gain from innovation on indexed bonds. I show the main results of this paper by incorporating …nancial transaction costs and unstable monetary policies in the GE model and provide the rigorous proofs for existence and uniqueness of the equilibrium. I also provide the comparative statics of bond trading volume with respect to asymmetric transaction costs. A static economy in which nominal taxes and transfers are balanced, as proposed by Balasko and Shell (1993), typically has a continuum of equilibrium money prices. The fourth essay presents a constructive example in which the set of equilibrium money prices is not connected. By allowing negative consumption as a mathematical construct, closed form solutions for equilibrium tax-adjusted income are derived.