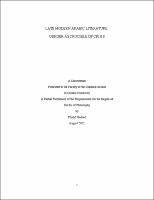 This dissertation explores the relation between gender and crisis in the late modern phase of Arabic literature-specifically, from the late 1960s to the present. Working with a regional Arab context, I define crisis as an endemic situation of political paralysis and cultural stagnation, one historically connected to the Arab world's failure to obtain the political freedom, economic independence, and social reform aspired to in anti-colonial nationalism. This dissertation focuses on literature that has developed out of three of the most salient crises since the late 1960s: the Israeli occupation of Palestine, sectarian strife in Lebanon, and the nexus between comprador capitalism and the police state in Egypt. The texts I read for this purpose are: from Palestine, the poems "Moans at the Permits Window" (1969) and "A Hurtful Wish" (1973) by Fadwa Tuqan, the poetic memoir The Siege (1982) by May al-Sayigh, the experimental novella All That's Left to You (1966) by Ghassan Kanafani, and the sociological novel The Inheritance (1997) by Sahar Khalifeh; from Lebanon, Rashid al-Daif's arguably "post-modern" novel Dear Mr Kawabata (1995) and Jabbur al-Duwayhi's historical novel The Rain of June (2006); and from Egypt, Sonallah Ibrahim's Kafkaesque novel The Committee (1981). My aim in reading these different literary treatments of crisis in a single framework of gender analysis is threefold: to call attention to gender as a critical dimension of historical continuity between the national and regional Arab contexts within which crisis unfolds; to present Arabic literature as a uniquely generative site for the imagining, and re-imagining, of the gender of crisis in the Arab world; and to suggest that the emergence of gender as a crucible of crisis-as opposed to an allegory of crisis-in Arabic literature is specific to the late modern period during which the selected texts were written. Given that my choice of primary texts is based on the extent of their thematic resonance with the proposed argument, the dissertation should not be read as a literary-historical survey. However, in light of the regional context within which gender appears as a crucible of crisis, I contend that my argument has strong implications for Arabic literary history.