The Imperative Topic Of Normative Language 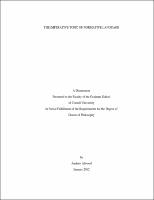 Normative language is characteristically used in ethical discussions about what we must do, what we should do, and what we may do. It is also used to discuss rather mundane issues where we need to coordinate our activities, e.g. what to do for dinner tonight, and to describe rules and requirements, e.g. what the law requires of us. This dissertation isolates a distinctively linguistic debate about the nature of normative meanings: Do they function to convey information or do they function to direct action? Several groups of linguistic data are marshaled in support of a positive answer to both of these questions. In particular, in chapter one, similarities between the deontic modals 'must', 'may', and 'should' and imperative sentences like 'Do it!' are described in detail. Chapter two explains the linguistic data from chapter one by constructing a theory on which normative meanings include imperatival meanings. The distinctive feature of normative meanings is what they are used to do (to require, to advise, to permit) as well as what they are used to talk about (obligations, values). Chapter three extends the theory so that it explains how the meanings of complex sentences are determined compositionally by the meaning and arrangement of their parts. This responds to a trenchant objection from Peter Geach who claimed that such a compositional theory is impossible. This chapter also compares the theory with metaethical expressivism.