Promotion Of Traditional African Vegetables In Kenya And Tanzania: A Case Study Of An Intervention Representing Emerging Imperatives In Global Nutrition 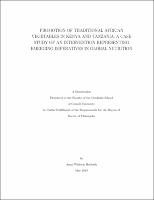 This research was done in the context of an agricultural program promoting production, marketing, and consumption of traditional African vegetables (TAVs) in central Kenya (Kiambu district) and northern Tanzania (Arusha region). The study aims were (1) to evaluate the effect of the program on diet and nutrition of participating smallholder farmer households, and (2) to examine broader questions of how traditional knowledge and crop diversity are related to smallholder farmers' diet quality. Household surveys of 338 smallholder farmers were carried out at baseline and one year later. Data on agricultural production, marketing, nutrition knowledge, attitudes, medicinal uses of the TAVs, diet, preschool child weight, and household demographics were collected. Focus group discussions contributed information to interpret and expand upon conclusions from the survey. Program participation was significantly related to TAV consumption in both countries. Other factors predicting increased TAV consumption were acquired knowledge about medicinal value of the TAVs, increased production (in Kiambu), and more favorable attitudes (in Arusha). Reporting of medicinal use of the TAVs, for ailments such as anemia, was common and significantly predictive of TAV consumption, while knowledge about micronutrient content was not. Program participation was not independently associated with diet quality (measured primarily as dietary diversity and dietary variety), but it was associated with improved economic well-being, which was associated with increased food purchase diversity, which in turn was associated with better diet quality. Crop diversity was significantly associated with dietary diversity in both sites, and was more closely related to home food consumption than to purchased food consumption. Farmers used many varieties of the same crop for different purposes, and within-crop diversity was correlated with increased consumption of that crop. The program appeared to affect TAV consumption and factors related to overall diet. Agricultural programs may need to increase attention to crop diversity to reach the goal of improved food security for smallholder farmers in the sub-Saharan African context. Within-crop diversity may also have important consumption and nutritional effects. Nutrition behavior change efforts may be most successful if they build on pre-existing knowledge and practices, which may be more important consumption motivators than introduced knowledge.