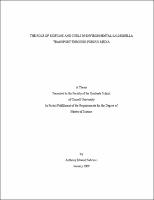 Microbial pathogens, such as Salmonella and Escherichia coli, are continually deposited in the environment and have been shown to contaminate groundwater by leaching through the vadose zone. Therefore, understanding the factors influencing the transport of these pathogens through porous media is critical to protecting drinking water supplies. This study investigated the relationship between biofilm formation and curli production and the transport of environmental Salmonella through porous media. Environmental Salmonella strains used in the experiment were isolated from dairy farms. Two well-characterized E. coli strains with known high and low biofilm and curli production capabilities were also tested as controls alongside the Salmonella isolates for each experiment. Thirty-two isolates were initially assayed for their ability to form biofilms, from which a subset of these was selected to represent a range of high and low biofilm and curli formation capabilities. These were subsequently examined in unsaturated sand columns for transport characteristics. Unlike the E. coli strains for which column retention correlated with biofilm formation and curli production, no obvious correlation was observed between Salmonella phenotypes and column retention. Salmonella strains that produced high amounts of curli and biofilms were actually less retained in the column than Salmonella strains producing low amounts of curli and biofilms, contradictory to observations made with E. coli. Swimming and swarming motility exhibited by strains also proved to have no correlation with column transport. The results indicate that while transport of wellcharacterized laboratory E. coli strains can often be hindered by the presence of curli and biofilms, the presence of curli did not retard the transport of the Salmonella strains through sand columns though it correlated with their ability to form biofilms.