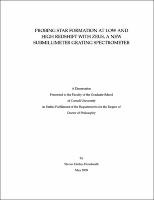 We have detected emission in the J = 6 ? 5 transition (? = 453 ?m) of the carbon monoxide isotopologue 13 CO from the starburst nucleus of the nearby galaxy NGC 253. This is the ?rst extragalactic detection of this transition, which traces the warm, dense molecular gas found in regions of massive star formation. An excitation analysis of the CO line strengths measured here and obtained from the literature ?nds that ? 35% ? 60% of the molecular gas mass (MH2 ? 2.9 ? 107 M? ) in the nuclear region is both warm (T ? 110 K) and dense (nH2 ? 104 cm?3 ). We ?nd that the gas is most likely heated either by an elevated density of cosmic rays, or by the dissipation of supersonic turbulence. As both of these heat sources are the result of stellar feedback within the starburst, our analysis suggests that the starburst may be self-limiting. We also present the detection of emission in the 2 P3/2 ? 2 P1/2 transition (? = 158 ?m) of ionized carbon from MIPS J142824.0+352619, an extremely luminous star-forming galaxy at z = 1.325. We combine this measurement with existing observations of the far-infrared continuum and CO emission to estimate that the bulk of the molecular gas in this galaxy is dense (nH2 ? 104 cm?3 ), and is illuminated by an ambient far-ultraviolet radiation ?eld ? 1000 times more intense than the mean ?eld measured in our Galaxy. These are similar conditions as experienced by the molecular gas in the starburst nuclei of nearby galaxies, and suggests that this source may be modeled as a scaled-up version of a starburst nucleus. The large star formation rate and molecular gas reservoir indicate that MIPS J142824.0+352619 is likely the progenitor of one of the population of massive elliptical galaxies seen in the local Universe. These observations were made with ZEUS, a new direct-detection grating spectrometer operating at the Caltech Submillimeter Observatory. ZEUS is a broad-band spectrometer providing a resolving power of ?/?? ? 1000 across the 350 ?m and 450 ?m telluric windows. It uses a 1 ? 32 semiconductor bolometer array oriented along the dispersion direction, and is con?gured to simultaneously provide a 16 pixel spectrum covering ?? ? 10 GHz in each of the two windows. The current sensitivity is within a factor of ? 1.2 and ? 1.3 of the background photon limit at the centers of the 350 ?m and 450 ?m bands, respectively, and this superb sensitivity coupled with the large instantaneous bandwidth make ZEUS an excellent tool for the observation of extragalactic spectral lines. Here we describe the design, construction, characterization, and implementation of this new instrument.