Democracy Within: Religion, Politics, and the Americanization of Psychoanalysis during and after World War II 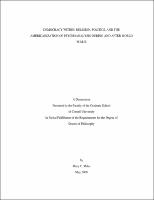 This dissertation is about the ways in which discussions of religion and those of psychoanalysis intersected and shaped each other in post-war America. Anyone who believed in either a salvation-based religion or a rational psychology found his or her beliefs challenged by the momentous developments of the mid-twentieth century: World War II, genocide, atomic destruction, and the cold war. Psychologists, psychiatrists, and religious leaders with interests in those fields found mental and emotional causes for these catastrophes and blamed repression, fear, and neurotic projection. In their views, just as Nazism and Stalinism had been fueled by psychological drives, democracy and liberty, to be maintained, had to be projected from deeply within the souls and psyches of Americans. The project of developing psychologies and models of the brain that reflected external commitments to freedom and democracy moved to the forefront of both popular and professional psychotherapy. My thesis aruges that discussions of psychoanalysis in the middle decades of the twentieth century offered American religious thinkers from diverse backgrounds an opportunity to introduce the values that they associated with their religion into the worlds of psychology -- both professional and popular. While behavioral and biological models threatened, in the view of many religious onlookers, to dehumanize the practice of psychiatry, psychoanalysis introduced discussions of ethics, freedom, and the meaning of life. From religious leaders, to psychiatrists who practiced faith, to patients who were spiritual seekers, the same impulses appear in their work: the desire to find, in psychoanalysis, an antidote to the materialism that they feared was lurking within the psychiatric world, and a longing to apply their discoveries to larger political philosophies. Hence, the phrase "democracy of the mind" emerges from these efforts to identify a psychiatry and a way of thinking that bolster democratic values as defined by twentieth century modernists and liberals -- freedom of expression and religion, pluralism, tolerance and reverence for the individual. The democratic mind is ordered so as to avoid "dictatorship" in the form of repression and to allow free expression among various thoughts and desires.