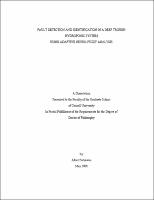 An early fault detection and identification system (FDI) can be an important part in any plant production system. A FDI can be used to avoid costly repairs and long disruptions in production. A hydroponic plant production system is a complex biological system that contains plants and microorganisms in its processes that are hard to model mathematically. A soft computing method called a neuro-fuzzy system is chosen to implement the FDI. A neuro-fuzzy system is a hybrid combination of a neural network and a fuzzy logic system that combines the best from both methods: knowledge based structure from fuzzy logic and a proven learning capability from a neural network. An adaptive neuro-fuzzy inference system (ANFIS) is developed to detect and identify actuator and sensor faults in the hydroponic plant production system. A separate system for exploring the ANFIS capability in detecting biological faults is also investigated. The novelty of the neuro-fuzzy FDI in this research used a single output to simultaneously detect and identify various faults in the system.